Despite recent improvements in enrolment after the initiation of the Universal Primary Education Policy (UPE) by the Ugandan government in 1997, which saw the elimination of primary school fees throughout the country, many children are still not able to attend. This is particularly true for the rural areas where consistently large family sizes, high prevalence of disease, and frequent drought and food shortages, mean that acute poverty is a reality for most families. Young children end up toiling for many hours in the fields under the sun or struggling under large jerry cans while fetching water. 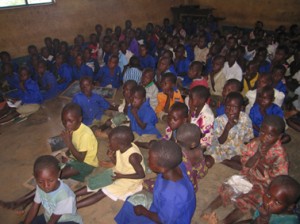 School is simply a dream for many children whose families cannot afford the basic school supplies or to spare the labour at home. For those families who do manage to put their children through the subsidized primary school system, few are able to continue to the more expensive secondary level. Even though primary education is almost free, it is estimated that 68% of Ugandan children 10 years old and above are illiterate.  Upon learning of the inadequate infrastructure and learning materials, long hours, and undernourishment these children face, the Leadership ’05 – 06 Class of Quamichan Middle School on Vancouver Island decided to sponsor the rural school that we had visited. The school group raised over $700, founding the Mbale Rural School Project. 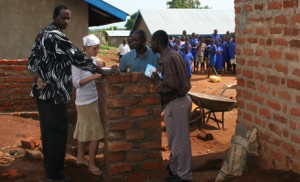 After careful consideration of the needs of the school, it was agreed that the lack of infrastructure was the most pressing problem. At this school, some students were forced to take their lessons outside in a small field beside the school during both the rainy seasons and the hot-dry seasons.  Lack of infrastructure also limited the number of children that could be enrolled. So, with the money raised, a new schoolhouse was built. After building the schoolhouse, the remaining funds were put towards the purchase of much needed textbooks.