The Dairy Goat Breeding Project is a local initiative designed to provide ongoing support for rural families affected by HIV that live in the villages surrounding Bwera, Uganda. One dairy goat is given to each family in the project, beginning with those families with the most desperate situations.

The project began with only three goats in 2005 and then 11 more were purchased in 2006 with the initial funds raised by selling goat magnets. On our return visit in 2007 we purchased another 50 goats, and through donations, we continue to purchase goats each year. There are now about 400 families that have one of the project’s dairy goats, supplying fresh milk daily to approximately 2500 individuals.

The gentleman is feeding his male goat. He earns an income through breeding his goat with other goats in our program.

A family that has received a goat. 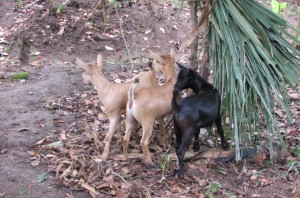 You can support this project by purchasing a goat for a family affected by HIV! Check out the PODA store for details.

We were particularly touched to visit a young mother from the Katasenda Village that had been in very bad state when we first gave her a goat in 2007. Since our last visit her goat has produced triplets, all of which she was granted permission to sell. We were proudly shown the three-room, permanent brick house that was being constructed with the money from those sales – a stark contrast to her leaking, dark, one room mud hut that we entered in 2007 to see the piles of leaves on which she slept with all of her children. 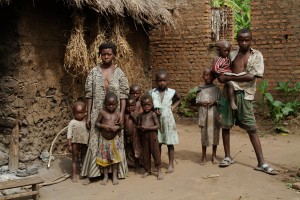 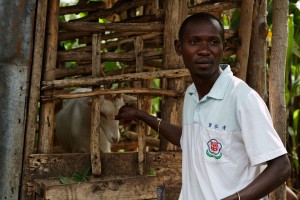 The families involved in the Goat Project are scattered over a very wide area surrounding Bwera; they are in each of the surrounding community groups (villages) that belong to our local partner organization, COBRA. The project has  grown rapidly thanks to a well-developed breeding program. Each of the groups has one robust male dairy goat that has the arduous task of accepting female visitors on a rotational basis. 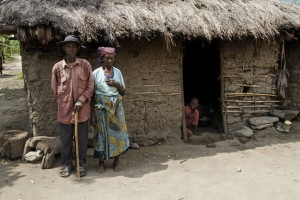 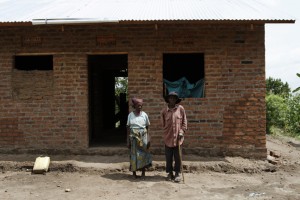 The first kid that is born to one of the project goats is given to a new family that has been identified by the community as a family in need. The second kid can be sold by the family with the proceeds often being put toward school fees, to begin the construction of a permanent home, or for the initial input to a small family income-generating project. A family with particular needs is free to apply to the COBRA Board to sell, rather than pass on, a kid that would otherwise have been given to a new project member. In this way, COBRA carefully balances the task of helping families attain some sort of incremental improvement to their health, living conditions, and education, while at the same time expanding the goat program to include new families in need – the organization seems to have navigated these difficult decisions extremely well.

Once placed with a family, the goat is kept in an elevated pen as a means of safeguarding it against ticks and mites. Its diet of locally grown elephant grass is supplemented with a local herb that naturally protects against many of the common ailments and diseases.

The goat produces approximately six to eight cups of milk daily. The family has the choice of drinking the nutrient rich milk to supplement meager diets or selling the milk to generate funds with which to buy basic medicines and foods. Furthermore, the goat urine is collected and sprinkled over vegetable crops as a natural pesticide, and the manure is used as a fertilizer.