African Hearts, formerly the Mengo-Bakuli Youth Brigade, is a youth support program created due to the growing number of orphans and other disadvantaged young people in the Mengo-Bakuli community. The goal of the organization is to provide a safe and nurturing environment off the streets, and in doing so, facilitate a brighter future for these amazing young boys. The group is currently made up of over 60 members, most of whom are HIV orphans and former street children. The boys practice and play in a marching brass band and take their meals and studies together in a common facility. 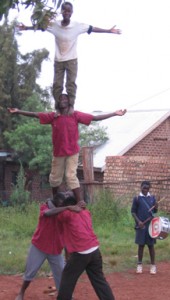 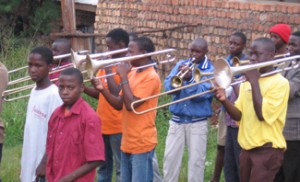 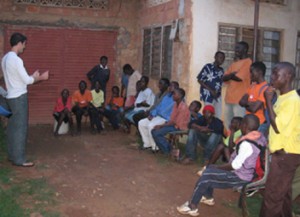 Since meeting the Mengo-Bakuli Youth Brigade in 2005, there has been a trickle of volunteers who have offered their knowledge and experience to the group. Some volunteers have taught life skills such as first aid, STD awareness, and basic nutrition; some have helped by teaching them how to read music and some have expanded the boy’s views of the world by giving lessons on global systems. Every volunteer has brought something different to the group and, despite the large range in ages and the educational background of the group members, the boys eagerly absorb each lesson.

In 2006, with funds raised by the students of Duncan Elementary and Palsson Primary School, we were able to purchase a taxi-scooter (boda-boda). scooter business guarantees the group enough money each week to feed and clothe every child group and to sponsor some of them to go to school.

In 2007, PODA assisted the group to attain NGO status in Uganda under the name African Hearts. This will allow the group to apply for grants and to be recognized as an official organization within Uganda. With each trip to Uganda we have been able to deliver a number of instruments that were donated by groups and individuals in Canada. Having their own instruments allows the group to avoid costly rental fees and have more instruments available for regular practices.